Life Cycles: What Goes Around Comes Around

This past November in 2015, on a beautiful & sunny Sunday, was the last day I ever rode my 1993 R100RS. Oh. believe me, I'd have continued to ride it straight into the virtual sunset, if not for the fact that I crashed it that fine day. In doing so, I definitively ended its first life- risking, I suppose, my own in the process. Well, that's Society's standard line of thinking; motorcycling is overtly risky at best; to ride is to laugh in the face of death; every crash, no matter how minor is catastrophic and calamitous.  Not that the crash itself was minor, per se... but you get the point.  Looking back with the perfect 20/20 clarity one gains only in hindsight, perhaps I should have just stayed home, sleeping and maybe eating on 8 November, 2015. But that is neither here nor there, as I did not stay home, eat, or sleep

I opted for this: 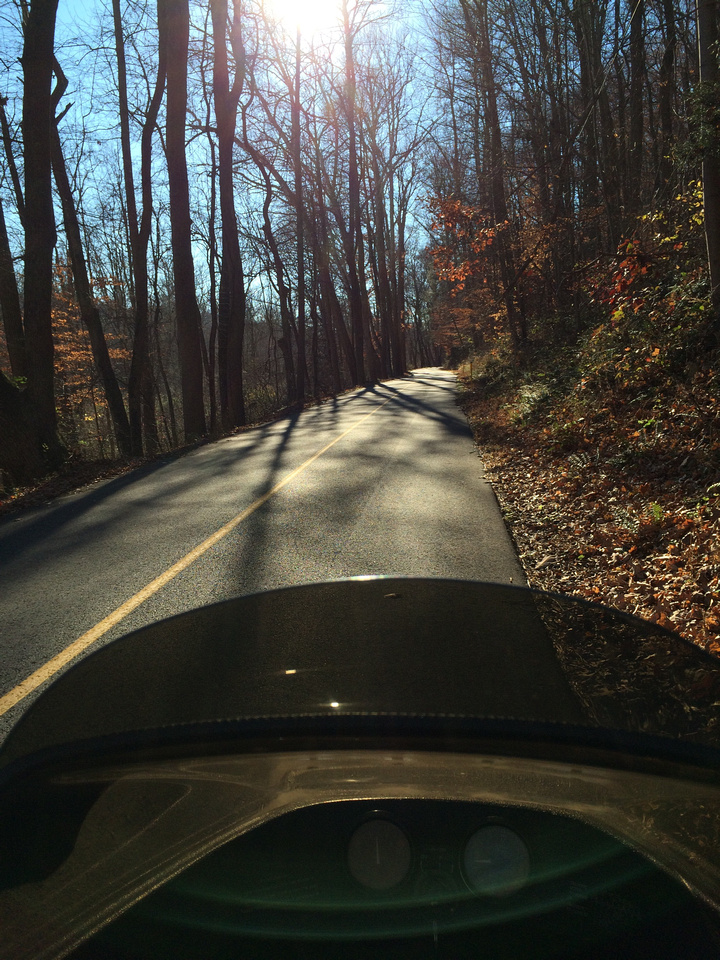 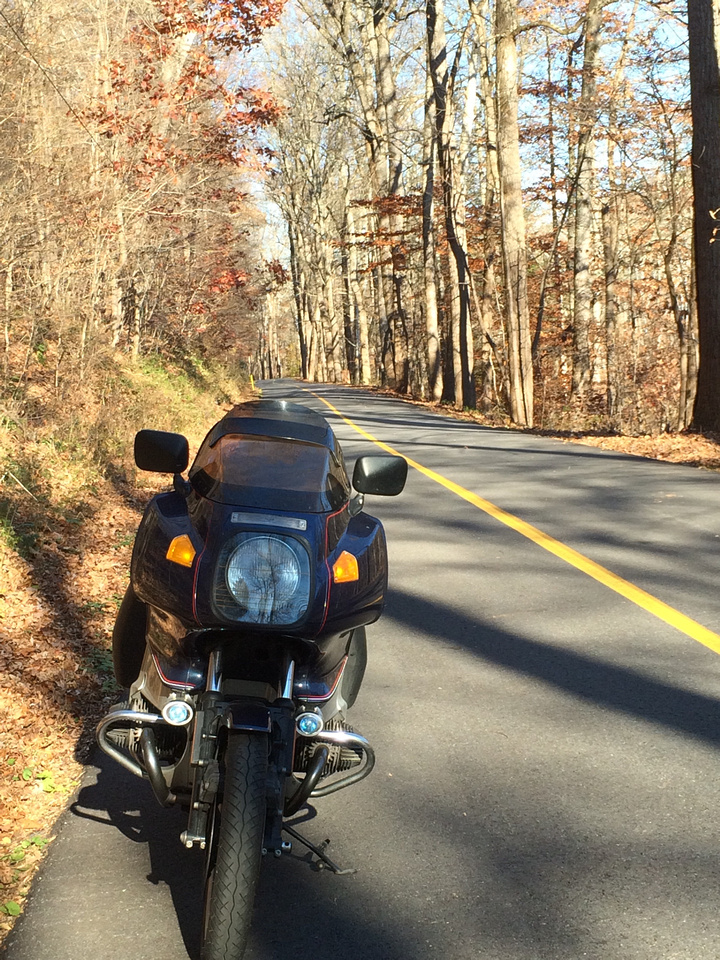 In short, it was a fabulous Autumn day. Sunny if not a bit chilly. I had worked that morning, in fact had been working for a few days in a row. We finished up early and I buzzed out to try to catch my friends Wade & Dave, whom I knew were out riding somewhere. Texting and calling proved fruitless, so I jumped on my bike after leaving VMs and whatnot, hoping to catch up to them at some point. Turns out they eventually stopped to eat and have a beer, then were heading home. Since I was way out in the next county to the north, they on the southern side of the Cumberland Valley, we agreed that maybe I'd catch them later on, over at Wade's or whatever. I carried on, more or less meandering my way south, heading in the vague direction of Wade's.

I eventually ended up coming into Boiling Springs, and was passing near a cemetery where a one-time fiance is buried. Joan died pretty much instantly in a horrific car crash back in January of 1995. One sunny day, she was just suddenly.... gone.  Obviously it was rough going for a while afterwards, but the living live on, dontcha know; I eventually recovered and carried on with life.  Over the years, I haven't spent too much time dwelling on it, but as I rode past that day, I looked up the hill towards where she lies, and got to thinking.  Just wondering, you know, things like "where are you, Joan?", "what if you'd never been killed?", & "where would we be now?".  I guess you could say I was lost in thought- not the most desirable head-space whilst out there all exposed, rocketing through reality, piloting a 500+ pound missile.

The next thing I remember after that is waking up, lying in the road, with well meaning (but somewhat annoying) people flocked around me, holding up fingers, asking questions, and keeping me from focusing on... what.... had.... happened. and pretty much blocking my ability to run my typical systems check. Yes, I have been hurt so badly so many times that I have a "process" which includes a systematic point-by-point rundown of my body, assessing any and all damages.

Turns out I wasn't too badly injured- I knew my L clavicle was probably fractured and both knees were banged up. But nothing major broken, no large cuts or bleeding, no internal discomfort- so probably no organ damage.  I'm not so much an ATGATT kind of guy, but I do wear protective gear. It had  certainly paid off this day. Later I would find my helmet was scraped and broken on all sides, my boots had scuff marks across the toes, my heavy leather jacket had minor scuffing here and there, and my gloves were barely scuffed at all. The last thing I saw of my bike as they closed the ambulance doors, was its relatively unbroken R side, as a couple folks rolled it off the road. 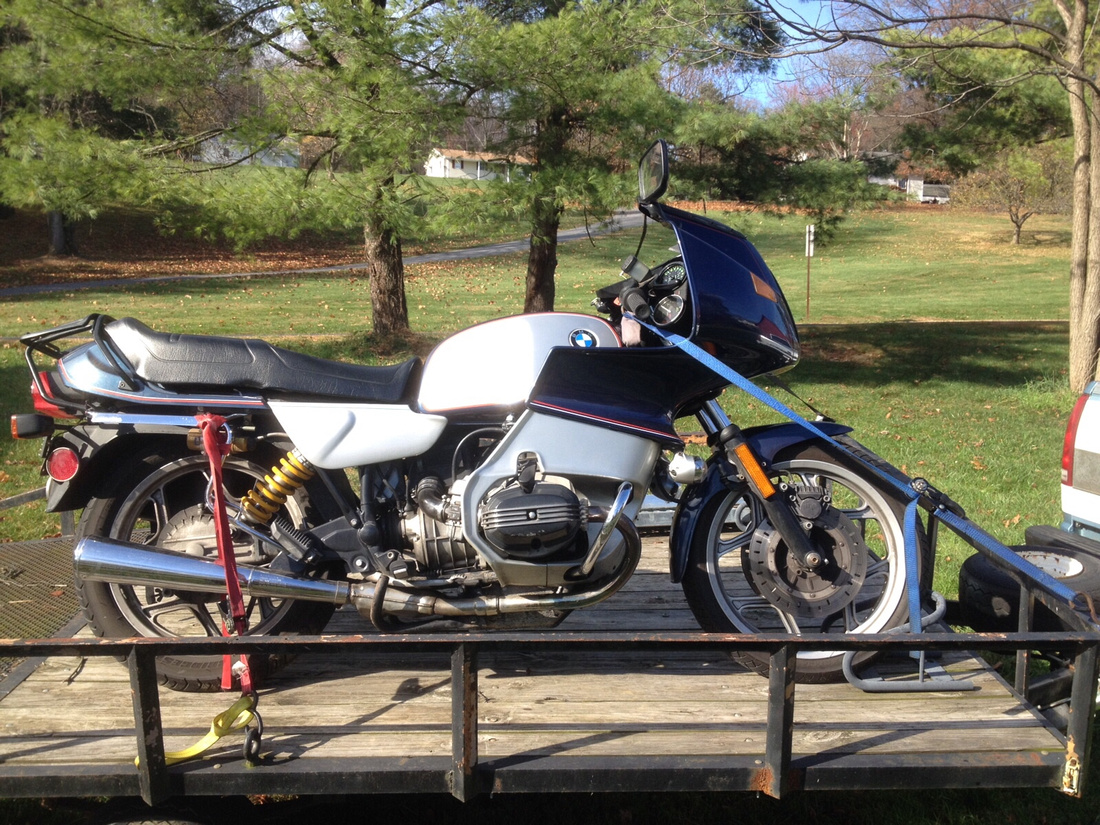 I didn't put any energy at all into thinking about it, instead opting to text Wade, saying something such as "CRASHED! IN AMBULANCE, HEADING TO HOSPITAL" and beginning to try to get a hold of Cynthia, all while chit-chatting with the EMT.

Wade sent some pix when he, Dave, and Cynthia all got there to pick the bike up.  My once beautify 1993 RS now looked like this: 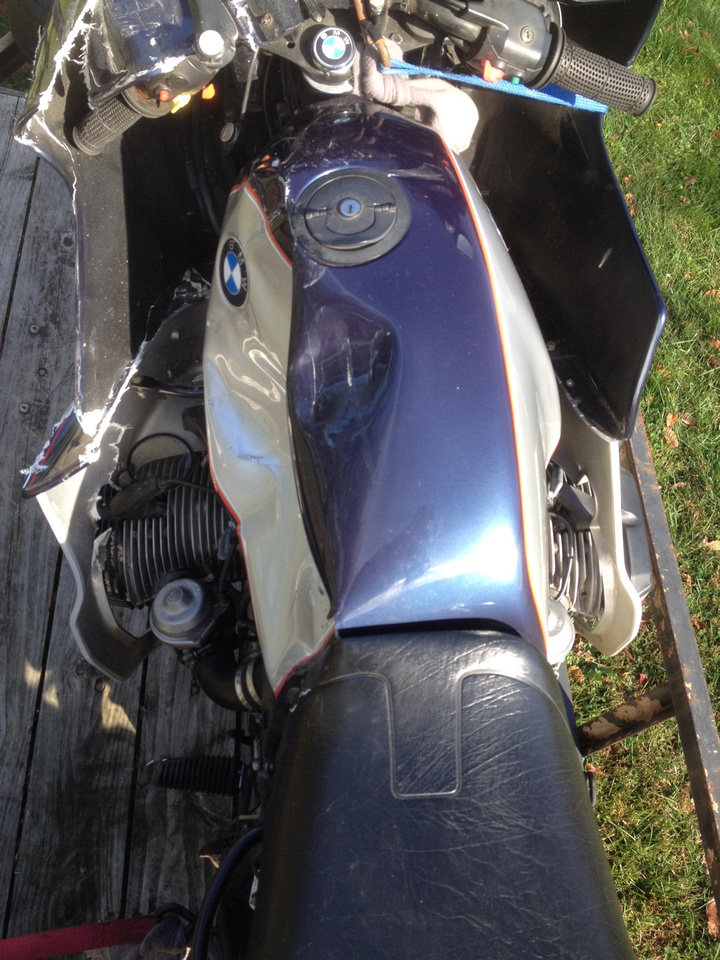 The bike was damaged far more than I was, thankfully. After a few days of serious R&R, I managed with some help, to get the bike down to my friend Dan's shop. We began the process of stripping off the broken, bent, and twisted bits, to get a view of how badly bent the frame was. After a cursory look, I had already figured the frame to be bent- it was just a question of how bad.  Pretty bad, actually. 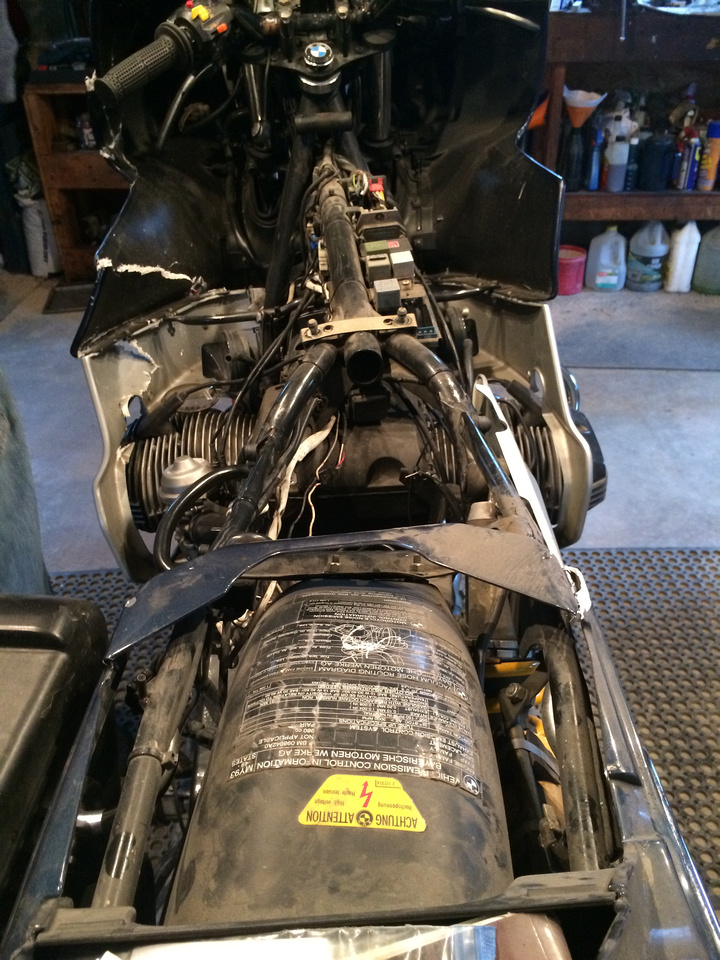 Reality set in hard & fast. The bike was woefully under insured, was obviously totaled. I wasn't going to get a dime for it, and I was sort of instantly over it. Dan & I spoke about it, and the possibilities for a rebuild.... but I just wasn't into it, and said as much.  An offer was made,  so without much ado, I decided to sell it to my "airhead guru" buddy who has helped me so much over the years.

Of course that meant a new bike was needed to fill, at the very least, the emotional vacuum
IE gaping hole in my psyche where my fine old RS used to exist. Not to mention the vacant space in the driveway. So, a quickie peep around the World Wide 'hood revealed a 1989 R100RS for sale- and not too awfully far away.

I emailed the guy, just out of curiosity, to ask about the bike. Told him I was more or less looking, just doing a little virtual "tire kicking" while killing time on the mend, as it were. Well. Alan was SUPER nice and sent me a big email with all manner of information- more, in fact, than I ever expected. Amongst the various data & tidbytes was one bit of information that took me by complete surprise. Turns out I am about as sure as I can be that I had looked at this bike several years back, when I first joined the MOA- it was advertised for sale by a Canadian Fellow. My guy bought it, had it for a while and put it up for sale! The story matched exactly the details I recalled from the time(+/- 2007/08), and Mr Ontario or wherever had indeed ridden the bike down, helped with all the Import paperwork and stuff, then flown home. Current seller was selling because he bought a new Super Tenere which usurped a need for any other machine.
(he really isn't any sort of Vintage Bike Nut anyway)

A bunch of chit-chat ensued via email and text. I made a trip to see the thing in person. He & I hit it off, and struck a deal, not only on the bike, but he threw in all manner of "extra stuff" as well!

So, blah blah blah. To cut to the chase, this past Saturday I drove my truck n trailer out there and got the bike. Without further ado, I now present My New Ride: 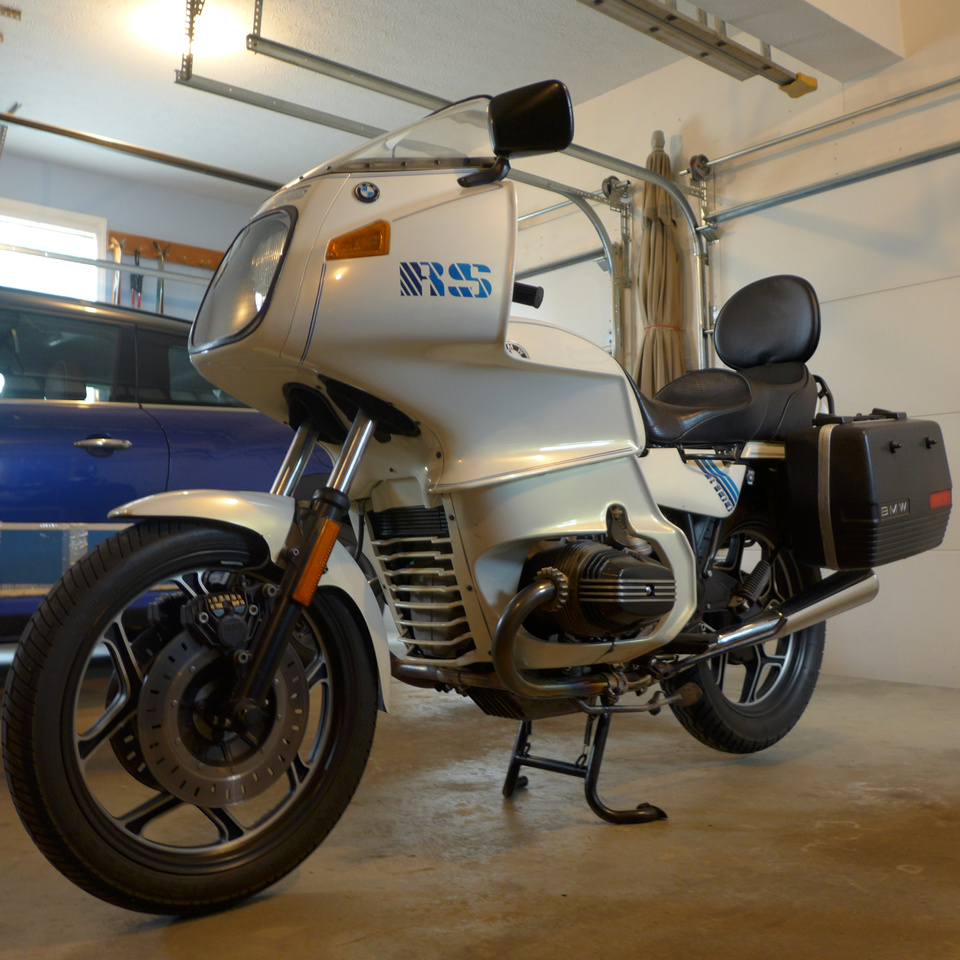 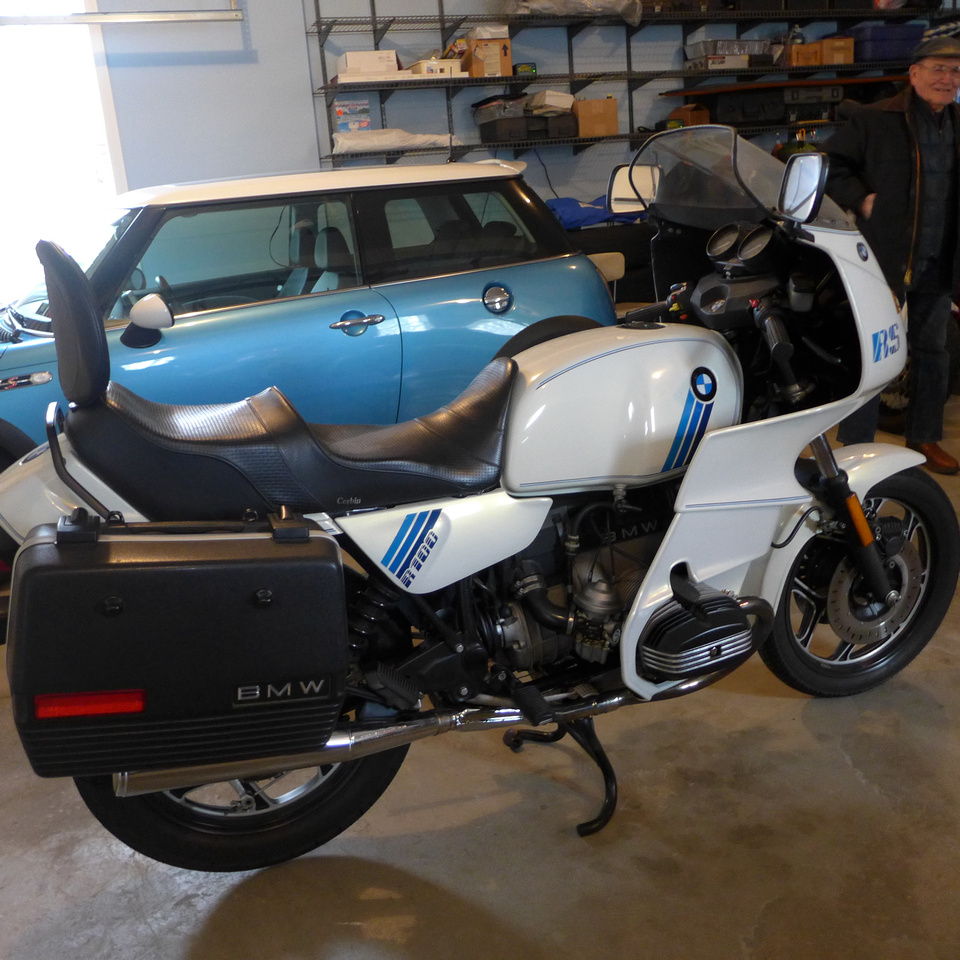 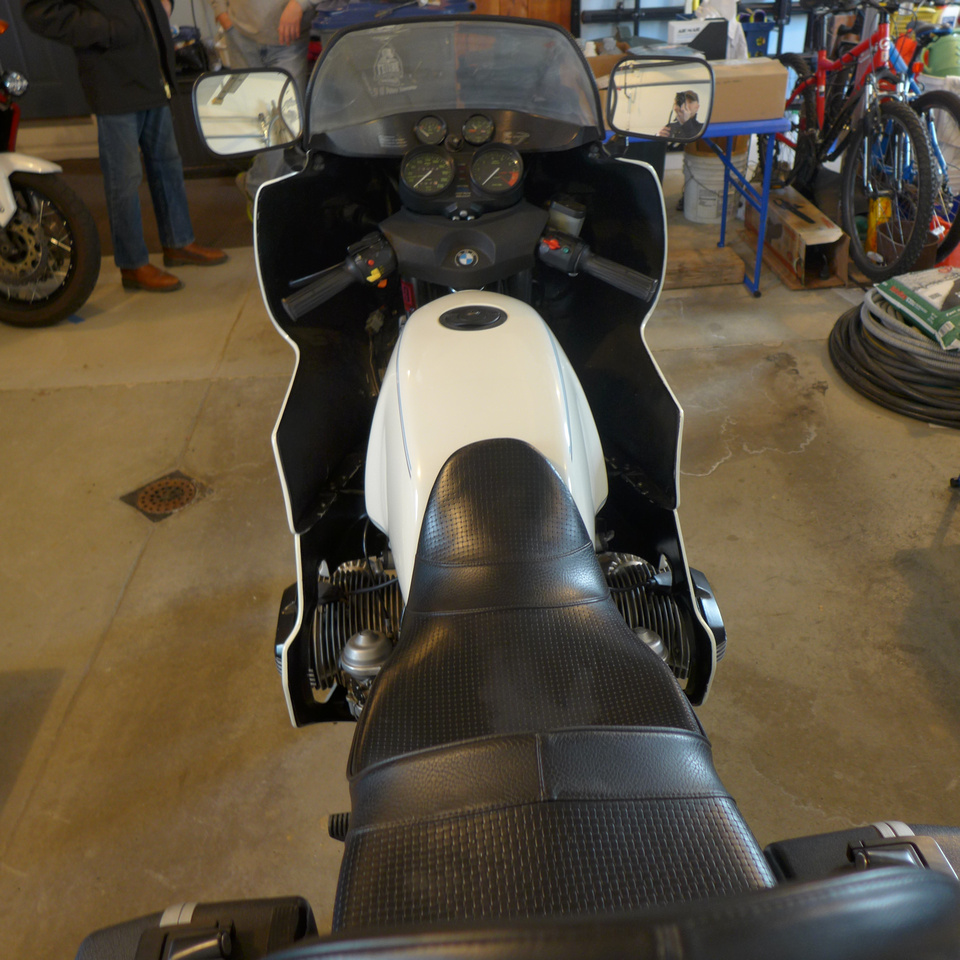 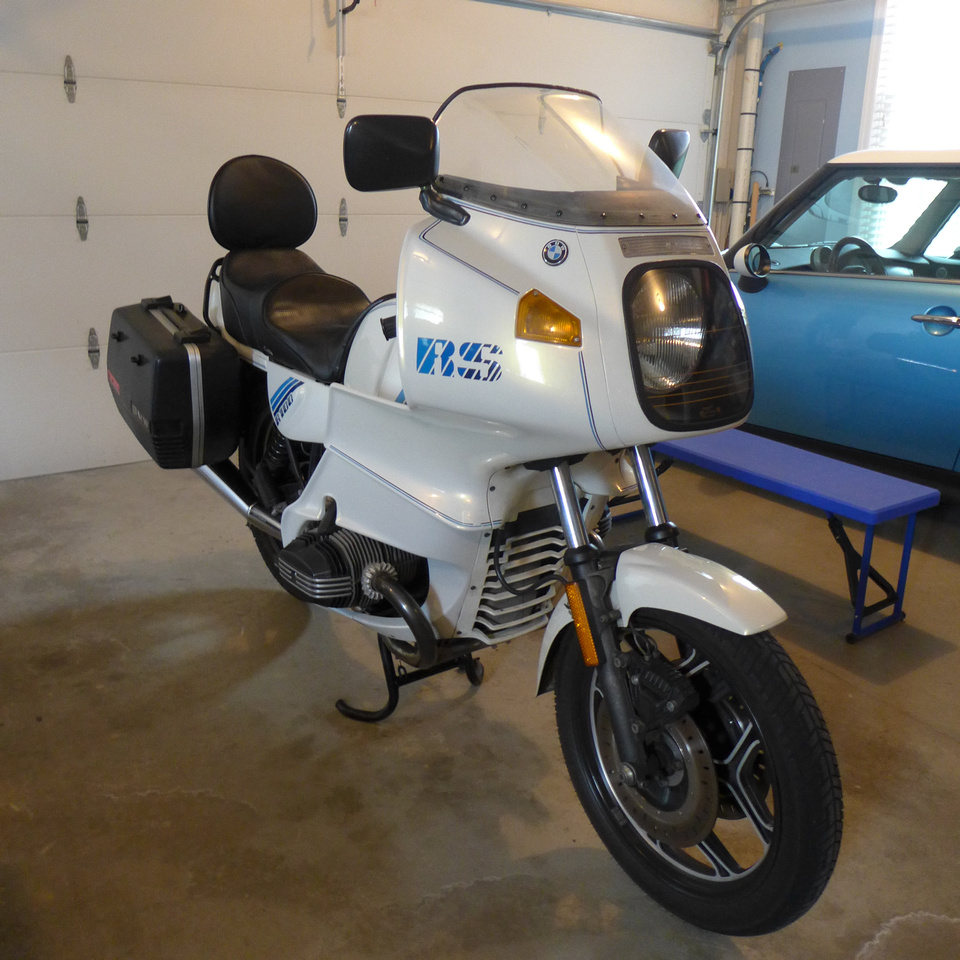 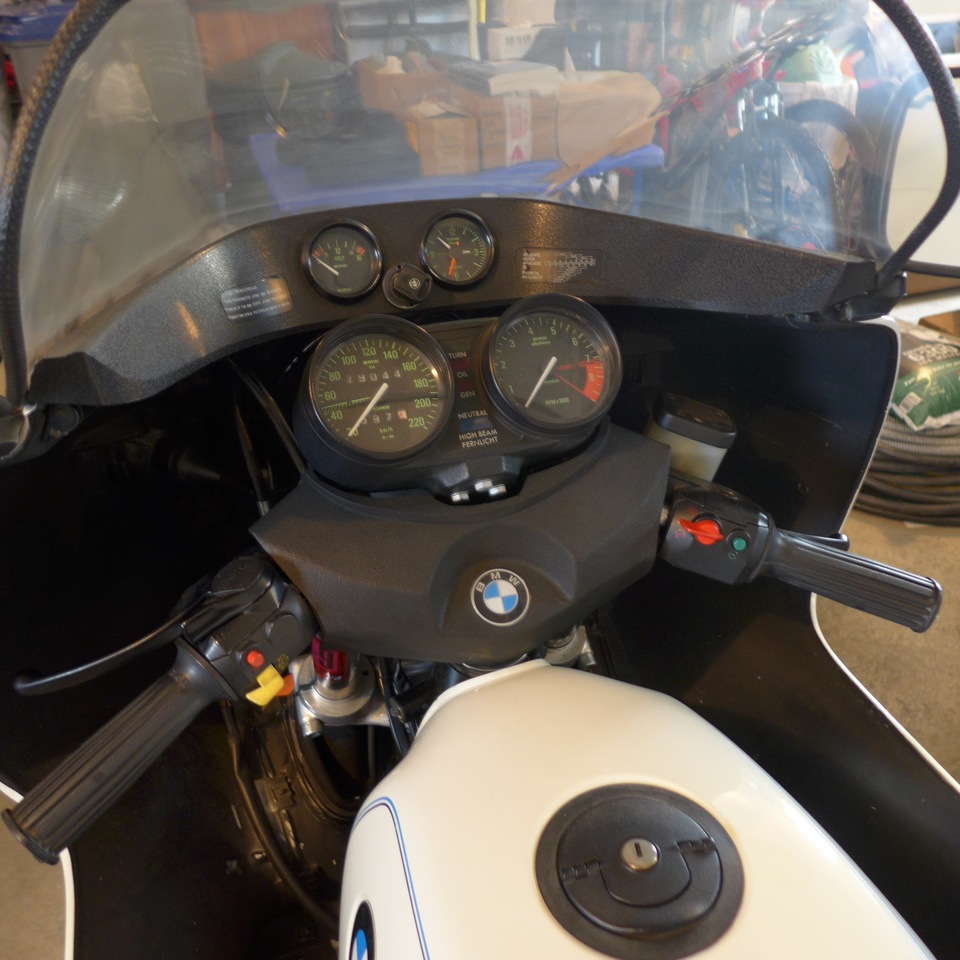 We haven't consummated our relationship just yet, Ive barely managed to get her across the proverbial threshold so far. It being Winter (and currently snowing), it might be a moment until I get out for a ride. But it does go to show that even a blind pig finds the occasional truffle. Life, meanwhile, cycles ever onwards towards its eventual end. I guess it's up to me to hang on and shoot for the checkered flag.